Assalamualaikum all..
Sorry for late update.... Alia was admitted!

Ok, let me tell u the story...
Thursday (Morning) - We took Alia to Tanglin Klinic to get her 5th Month's shot.. 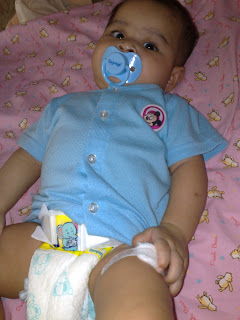 Thursday (Evening) - Since we were on leave that day, and Alia caught some cough n flu, we went to An-Nur Specialist Hospital in Bangi. Many told me that the hospital is good! That's why we went there, despite there are some nearby hospitals..

So, Dr Mahani (I think that's her name) asked us to go for a treatment called nebuliser ('neb').... ALia was ok at first, but later on she broke into tears.. 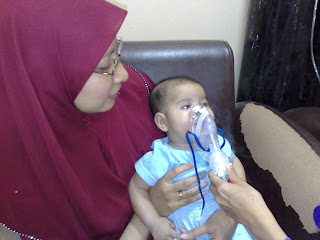 After the neb, Dr examine her again, but she insisted on admitted her.

(Reason being was that she suspected Alia was having Bronchitis (please forgive me if the spelling is incorrect). Bronchitis can be seen from her chesty cough, and she has been having the cough for quite some time now. If this Bronc.... not treated, it may lead to pneumonia.. (that's what i've been told..) Aiyo...

Although we had no intention to admit her, what so ever, but for the sake of her health, I just 'redha' and hope for the best! 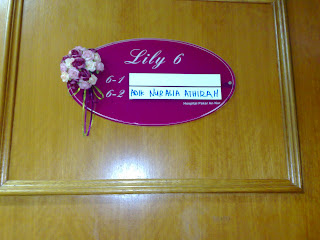 So, the treatments are:

-antibiotic (orally) and not so orally hahaha.. (they injected Alia's foot and some medications went thru there..) Poor Alia.. Has to suffer.. 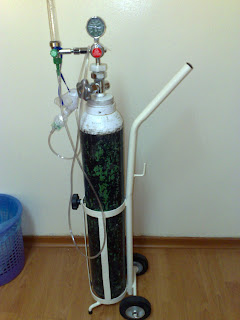 and every 4 hours, a nurse will come and give it to ALia to inhale it.. 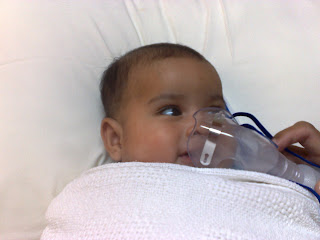 Erm.. before Alia was admitted, we told the Dr that we planned to do Alia's 'berkhatan' at Hamid Arshad Clinic, and Dr Malini told us that we can do it here, so, we agreed to it.

*sorry, pic too sensored to be published..

Oh ya, forgot to tell u, Alia also went to see a Physiotherapist. He showed us how to tap her back after the gas session. 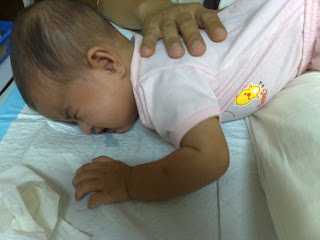 and also he did some suctions thru her nose. Yes, she was crying (out loud!) 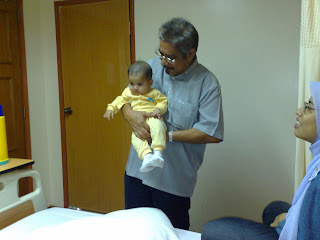 To cut things short, after 2 nights and 2 sessions of physio, Alia can FINALLY go home! (how happy I was..!)

But we were given a pump and we had to do a treatment using it every 6 hrs.


In the end, when I see her smile, every minute, every obstacle just worth it! 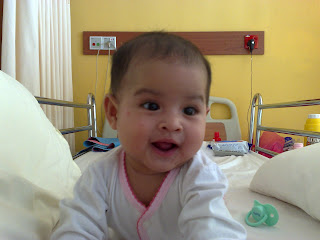