on The One With a lot of Topics... 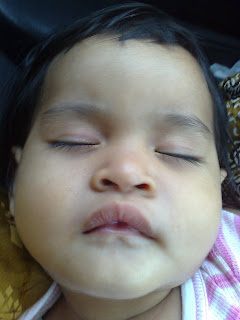 Salam...
Oh.. So many topics! (and stories!..)
Erm... well, let's see....
Alhamdulillah, ALia has recover from her previous fever.. alhamdulillah...
Erm.. ceritanya gini.. Last friday morning, we sent her to makcik babysitter... and we both went to work..
I was attending the workshop.. when i got a call, from makcik. She told me that Alia was quite hot.. and she gave her the medicine already.. and she wasn't eating at all...
So, without any delay, we rushed to Saujana Utama.. picked Alia.. and went to Putra MEdical Centre. It was the one and only private hospital in our area (that i know of.. haha) **Actually tujuan pergi ke hospital was that i had a hunch that Alia might be warded..
We were greeted by a funny looking man. (turned out he was the "Professor" from Pepaya TV series.. and they were actually was filming it.. haha)
Ok, back to Alia.. so the Dr said that Alia was having an Acute Tonsilitis ... (tonsil pun ada acute eh..?) erm. so that's why she refused to eat / drink, and this resulted her sudden fever.
"Boleh baik ke ni, Dr..?" We asked
Dr said that after given antibiotics for 2 or 3 days, she should be ok.. :) Alhamdulillah..
(tak mahal pun.. antibiotics, plus the fever medicine.. altogether, RM50)
So, after that, PATUTNYA I went home and take care of my lil baby, rite..?
turned out.. Mr Hubby accidentally left our house key at the office.. hehe.. (and i don't have a spare key! hehe)
So.... we went to PSN... Dah alang2 di PSN.. so, i joined the workshop back..
That nite, Alia had a temperature again..! Adui.. dah bagi ubat demam (liquid) ikut time.. tapi, tiba2 panas pula.. so, after 4 hrs, we gave her the ubat demam (the one yang cucuk ikut bont0t tu..).. Actually Dr mmg dah ramal, akan jadi suhu fluctuate gini.. tu yg dia bekalkan.. hehe..
So, initial plan was, the day after that (Saturday) we were supposed to go to Bruas.. erm.. beraya di sana.. tp i was worried with Alia's condition.. but Mr Hubby bertegas nak balik kampung dia juga.. haha..
Alhamdulillah, Saturday morning Alia pun dah x demam dah.. and we went to Bruas happily! :)
Oh ya, Opah Alia dan Wan Bruas masak lemang, dengan rendang ayam dan rendang daging.. Since that ibu Alia mmg x berapa favour of lemang.. so ibu ALia makan lauknya saja.. haha..
On Monday.. noon.. we headed to KL! Sampai je di rumah Atuk dan Wan KL, Ibu Alia melantak lontong, nasi impit, masak lodeh, kuah kacang, sambal udang.. rendang pun ada.. wah.. baanyaaak sangat makanan! :)
Tuesday (that's today..) Ibu Alia and Ayah Alia plus Alia.. went home.. oh ya, before that, early in the morning we (the 3 of us) and Ely + Ika went to Jaya Jusco AU2.. wee...! seronok! oh well, x la seronok mana, biasa je.. but seronok pasal JJ ni baru open last friday.. so kami ni kira orang yang terawal la melawat JJ ni.. haha..
The best part was... i bought THIS! 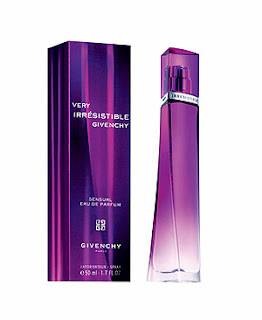 heheh.. due to my recently finished perfume.. (Ibu Alia is a fan of Givenchy.. :)
Oh ya, insya Allah, on Thursday, we'll be going here! :)