Haha.. what a funny title!

Well, actually last sunday evening, we went to Giant and got one of these.... 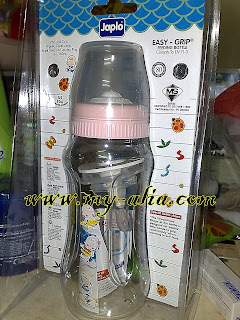 For our dearest Alia..

**actually, everytime Danial comes to Au3, one of alia's favourite is danial's bottle! in fact during his last visit, after kek (that's danial's mom) made some milk for danial, alia quickly reached out for the bottle and put it in her mouth! (as though it was hers!)..

but when we went to Giant, the actual price was around RM 23! wah.. so expensive! (last time we bought a bottle that was also a bit pricey was Avent bottle.. haha.. tak sangka Japlo pun mahal juga!) :)

Before this, we only buy the one that has disney characters (Pooh, Mickey etc) and 2 bottles were about RM20 .. :) hehe..

**recession has made me become a bit stingy! haha..