on Mesra and Real Reward card

Well, i am SURE u've heard the news..

Petronas has launched their own PETRONAS Mesra Card, no more join venture with Real Rewards (a.k.a Kad Mesra-Real Reward).

erm.. so, for those who has their Mesra Real Reward card (like the one in the above pic), up till 31st May 09, you have to choose between :
~Redeem all the Real points (either via their website, or to the Pusat Penebusan Carrefour, Wangsa Maju)
or
~Transfer the points (accumulated from Petronas Station ONLY) to the new Petronas Mesra Card
:)
so, what are you waiting for...? Quick! change your Mesra-Real Reward NOW! :) 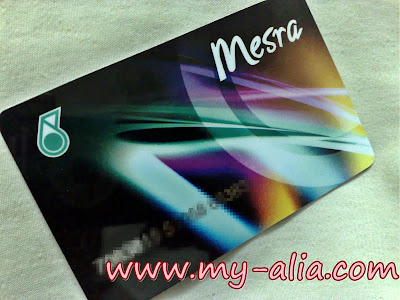 *psst.. some of Petronas Stations are already out of stock of their new PETONAS Mesra Card. So, the trick is, you go to any Petronas station, ask whether they still have the cards. And if they still do, then you fill in the forms right there and ask for the new card in return! :)
footnote: a million thanx to Mr Hubby for the unwillingly, but eventually he turned around to mom's house to fetch my Eclipse yang tertinggal di atas sofa (although it was late and we were already on the way to the office!) :)