nak dijadikan cerita, semalam, selepas mr hubby pulang dari bawa my dad berubat, he got a phone call.. from the office.. requesting him to come over right away!

after mr hubby finished his work, it was already 6.30 pm.

went to TGV first, but the one and only Transformers show has started already! (the show was at 6.30 pm) 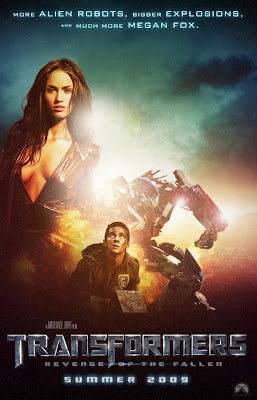 the seats were on the third row from the front, nak ikutkan, memang sakit kepala, but luckily, the cinema hall was a bit small, so the screen wasn't so gigantic, and we managed to watch it dengan selesa.. :)

SO, TRANSFORMERS : REVENGE OF THE FALLEN :

-it was like what i had expected : lots of actions, lots of sound effects, oh and the relationship between Micheala (tul ke eja nih..?) and Sam blooms.. :)

after the show, the time was already 11.00 pm something.. surprisingly, when we were on our way to the lower floor (to the 3rd floor), the security guards there didn't allow us to use the escalator! he asked us to use the elevator instead! (apalagi! sesat la kami! :( )

oh, tak apa lah.. at least i got to watch Transformers! at last! ;)