Well, have you heard of a Tooth Fairy...? Tooth fairy is a fairytale character that is supposed to collect tooth fallen off from children and in return, it (it...? or she...?) gives them a small amount of money. The tooth fairy usually operates at night when the child is asleep. :) 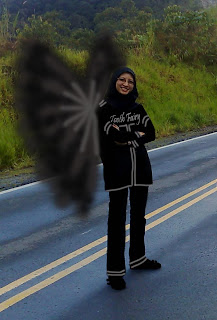 Why black..? my answer is simple! at night, it is quite difficult to see us! ~'us' means 'me and the rest of the tooth fairies'! :)

My weapon..? Oh, i am simply a quick and fast tooth fairy, so i do not need any gadget to help me to snatch the tooth! only that.... i usually use my magic dust! (yup. i do have this special magic dust, and before i start my 'operation', usually i will use some of it onto the child, so that he/she will be in deep sleep. Nice, huh! :)

oh ya, and there's another thing, as you can see, my uniform has grey stripes, those lines are to alert all my fairy friends! (you know, just in case if there's trouble, the color will change from grey to red! and as i will try to escape, that will trigger an alert, and my friends will come over and help me!)

Oh ya did i tell you that like all the other fairies, i do have wings too! but it is also in black (or grey, if you must!), that really helps me in dark too!

So now, i am sure my loyal blog readers out there have seen the Nuffnang Tooth Fairy ads like a zillion times! :)

For your information, this time around, Dwayne Johnson (aka The Rock) will act in this Twentieth Century Fox's film entitled Tooth Fairy which will be in our cinemas this coming 21st January!

here's some sypnosis on the film:

Dwayne Johnson is “The Tooth Fairy,” also known as Derek Thompson, a hard-charging hockey player whose nickname comes from his habit of separating opposing players from their bicuspids. When Derek discourages a youngster’s dreams, he’s sentenced to one week’s hard labor as a real tooth fairy, complete with the requisite tutu, wings and magic wand. At first, Derek “can’t handle the tooth” – bumbling and stumbling as he tries to furtively wing his way through strangers’ homes…doing what tooth fairies do. But as Derek slowly adapts to his new position, he begins to rediscover his own forgotten dreams.

~let's just hope that i win the invitation for the Premier Screening of Tooth Fairy.. :)